Imagine what it would feel like to know that, just by doing what you normally do, the world was automatically becoming a much better place.

Imagine what making that kind of a difference would do for you and your people… to your levels of pride, joy, engagement and productivity.

And imagine what it would mean for your reputation, sales, customer loyalty and profits.

Now stop imagining, and put 10am on 19 August in your diary.

Because that’s when we’ll be giving you a pre-publication copy of Our time to RISE… a brilliant new book coming out in September that explains how to do all of the above in step-by-step detail.

And it’s also when one of the book’s authors, Steve Pipe, will personally show you how to make it all work brilliantly well in your business.

Get it all here 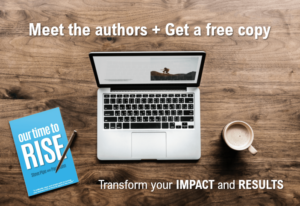 Steve is a former UK Entrepreneur of The Year. And his fast-moving presentations are based on his unswerving belief that every single business in the world can (and should) be a force for good.

He grew his boutique consulting business from a spare bedroom to a team of 40 people. And after 20 years of researching and discovering what works, he sold that business on reaching his 50th birthday.

Now, in “retirement”, he is giving away all of his time and intellectual property to help make the world a better place.

His personal Impact Scorecard shows he has already made over 5 million Impacts toward achieving the UN Global Goals. And he has inspired others to make a further 12 million impacts.

While his speeches, consulting work, 8 business books and 7-part BBC TV series “Easy Money” have earned him over 500 testimonials on LinkedIn.

In turn those resulted in him being named as “The world’s most highly rated accountant”, and have won him many other awards and accolades.

Want to grow your business? Our Free Resources will Help